I was writing regularly when my son was going through cancer treatments, and one of my posts was about how Shamrock Shakes become not just a treat, but something quite a bit more, during that journey. So here's a re-post about those weird green shakes. 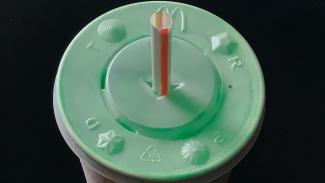 What follows is a re-post from the time when I was writing during my then-2-year-old son's cancer treatments. It came to mind today because I had myself the first Shamrock Shake of the season, and because it's apparently ThrowBackThursday. So it all comes together to allow me to publish something when I don't have a lot of time to actually write.

If you're interested in the journey our family was on, here's the site that documents that journey.

I generally dislike McDonald's food. The fries are super-salty, which makes them decent, and the $1 pops in the summer are nice, but I just cannot handle their burgers. On the rare occasion we take the kids there, I always regret ordering a combo. By now I should have learned just to get a smoothie or maybe even just fries and a pop.

And being the digital native that I am, I went to look online if they had them in Penticton this year (a couple of years ago, they didn’t have them here, so it’s a legit question). And one of the first results was McDonald’s “History of the Shamrock Shake” page.

Naturally, being the curious sort, I read it.

I’d use a few words to describe Shamrock Shakes: tasty, minty, green, enjoyable, indulgence. But one word I wouldn’t have used until tonight is meaningful.

If you’ve clicked the link already and read it, you know now why. If not, here’s the pointer version: the original idea for the Shamrock Shake was conceived in a pediatric oncology ward in Children’s Hospital of Philadelphia in 1970. The first sales of them funded the building of the first Ronald McDonald house.

So now as I sit here sipping my first Shamrock Shake of 2014, I taste something more than minty shakey goodness. I get a taste of the desire to help a 3-year-old girl with leukemia in Philadelphia in 1970, a 2-year-old boy with a germ cell tumour in 2014, and all the kids in between who’ve been helped by those that came up with this fun March treat.

Join me in the indulgence on Monday, or whenever, and raise a cup for all the kids who so desperately need help.