Jesus Christ is the Son of Man. And the Son of God. 100% man. 100% God. During this season of Lent we're rediscovering the reality of the humanity of Jesus, and all that means for us. 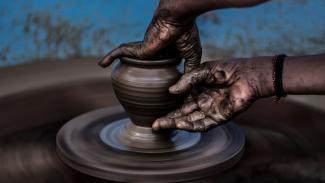 Photo by SwapnIl Dwivedi on Unsplash.

At our church during this season of Lent, we’ve been working through a series called “Behold the Man!”. It’s based on the words of Pontius Pilate when the soldiers had dressed up Jesus as a king, intended to mock Him (but ironically dressing Him in an expensive purple robe, which actually was fit for a king!). When Jesus is brought out before the crowd after being flogged, spit on, mocked, and dressed in the robe and a crown of thorns by the Roman soldiers, Pilate says to the crowd as he’s trying to set Jesus free, “Behold the man!” (John 19:5).

What a statement this is. It seems like Pilate is saying, “look, here he is - haven’t we done enough already? I find no guilt in him, but I had him flogged, and he’s been mocked and beaten, all on your say-so. Look - look! - at the man!”

But that’s not enough for the leaders of the crowd. Nothing less than crucifixion will satisfy them.

So this whole series is based on the humanity of Jesus. Yes, Jesus is 100% God and 100% man. He is the God-man; divine nature and human nature in one inseparable Person.

But we don’t often take real time to consider that Jesus was, in fact, human. He was a man. Or, better, as Pilate said, “The Man!” In Jesus, God has hair that was pulled out of His chin, skin that was ripped from His back when flogged, a tongue that stuck to the roof of His mouth when parched and thirsty. He had a mother, He hungered after fasting. He knew human emotion, weeping at the death of His friend Lazarus.

All of this has been a helpful reflection to me, and, I pray, to our people. We often like to “spiritualize” things - to take them out of the realm of the physical and “elevate” them to make them sound more lofty and important. But to de-emphasize the physicality of the Bible, of Jesus, and of our Christian faith is to do a grave injustice to all of it. We are human; flesh, blood, spirit, soul. To have body and soul separated is to be less than human; it’s what we call death.

No, the Christian faith is tangible; it’s physical. It’s waves moving through the air as the Word of God is spoken by people with tongues and lips forming sounds and then is heard by people with eardrums and brains to interpret those waves. It’s particles (or is it waves) as people see the Word of God on the page, as they see images of the stories of the Scriptures in the arts. It’s nerve endings responding as brothers and sisters in Christ shake hands and offer hugs of celebration and sympathy. It’s water flowing over a body with the Word at Baptism, washing away sin. It’s the taste and smell of bread and wine as they deliver the body and blood of Jesus to believer’s mouths, strengthening them with the very food of heaven.

And, in the midst of attending a funeral one day and preaching at another a day later, it’s the confession of the promise that there will be a physical, bodily resurrection of the dead. It’s what we confess in the ancient creeds of the Church: I believe...in the resurrection of the body, and the life everlasting. So many people have this picture of heaven as some weird place where spirits will be somehow floating on clouds for eternity. No! The Bible speaks of a new heaven and a new earth, of the best wine and the best meats, of the tree of life and the new Jerusalem, of new and perfected bodies that will be incorruptible by fatigue, disease, or death (because none of those will exist anymore).

It’s real. It’s physical. It’s tangible. It’s earthy. It’s been a challenging few weeks as we think about the man Jesus, and all that means. What it means that we have a God who’s rejected who’s beaten, who’s left exposed to die on an instrument of torture. All so that we wouldn’t be left to the eternal (also very physical) consequences of our brokenness and sin, but that our brokenness and sin would be covered with the robe of righteousness that Jesus Himself gives us.