There is one word that we need to know about our salvation: τετέλεσται. It’s a Greek word that means “it is finished”. But there’s way more to it than just “something happened”. 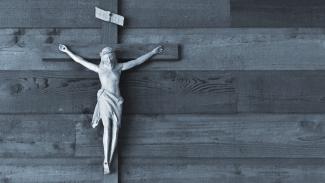 I’m more than a bit of a grammar nerd. I’m fascinated by the way language is constructed, by the way words convey meaning and the ways they relate to each other. I’m such a grammar nerd that I have a whole argument laid out in my head (soon to be committed to this site) about why prepositions are the most important category of words. As I’ve begun to learn the original Biblical languages over the past number of years, I’m fascinated by them, too.

One of the most fascinating things to me is the concept of inflection. That’s when the form of a word changes to indicate things like the number, person, and tense. English uses very little inflection, but languages like Greek and Hebrew use it quite a bit. That’s why one word in a language like Greek can need multiple words in an English translation of that word. It’s also why it can be harder to learn other languages for native English speakers, because it’s a different way of thinking and using words. And, it’s a different way of constructing sentences; because of inflection, the order of words in a sentence are much more flexible than in a language like English. (I often tell my Bible study groups that if you keep the word order when translating from Greek to English, it can often come out in Yoda-like speech, which is actually kind of fun.)

Another intriguing grammar concept is tense, which is what describes the time of an action. We typically think of present, past, and future tenses, but there’s more nuance than that. One of these more nuanced tenses in Greek is the perfect, which is action in a past time but which has some relationship to the present. So it’s not just that something happened; it’s that that thing happened, and its result is still in effect now. The closest English tense is the present perfect. (There are additional perfect tenses in English and Greek, but for now, let's focus on this one.)

So, add the perfect tense to the concept of inflection, and you get what I consider to be a perfect word in the Greek New Testament: τετέλεσται. It’s one of a few Greek words that you might actually see “out there” in Christian circles, but really only around one day a year. That day is Good Friday, and the word (pronounced “teh-TELL-ess-tie” and transliterated into English letters as tetelestai) is the perfect passive (the use of the passive in Scripture needs its own post) tense of the word meaning "to accomplish, to finish, to complete". It's generally translated, “It is finished”. It’s one of the last words Jesus said from the cross, and you can find it in John 19:30 (and 19:28).

But to really capture the meaning of the phrase “it is finished”, you need to know that it’s a perfect tense phrase, not a simple past tense phrase. With that English translation it’s almost impossible to tell which one it is. Sure, the “is” gives a bit of a clue (and it’s the same clue that becomes a little more clear in a peculiar phrase like “Christ is risen!”). But one look at that one Greek word leaves no doubt because of the inflection; it’s perfect tense.

If it weren’t so wordy, a much more powerful English translation of tetelestai would be something like, “it has been and still remains finished”. It can take seven or more English words to really capture what one perfect-tense inflected word in Greek will accomplish.

Of course, anyone interested in the grammar of a phrase like "it is finished" (and, if you’ve read this far, thank you for sharing my interest) will ask about the referent: what does the “it” refer to? (Yes, super-duper grammar nerds, I know I'm not supposed to end a sentence with a preposition, but that's formal grammar. This is a blog, so prepositions are the types of words we're going to end sentences with. At least, from time to time. (Doh! Sentence fragment! Doh! Another one!))

Where were we? Oh yes, the referent: What has been and still remains finished?

Ahh, now we enter into another fascinating domain: exegesis, the “leading out” of the meaning of the text. This post is already too long for what we’re constantly being told is the minuscule attention spans of the Internet generation (I don’t buy it, and if you’re reading this, you’ve obviously chosen the red pill and you can see how deep the rabbit hole goes), so, if you'll trust me on this for now, I’ll go straight to the conclusion of a lot of exegetical work: taken together with the whole of the teaching of the Bible, the “it” that has been and remains finished is “that which Jesus came to do, in fulfillment of Scripture”: to be the perfect Lamb of God, who by His sacrificial death takes away the sin of the world.

All this is to say that in Christian theology there is perhaps no more perfect word than tetelestai (sure, I’d love to make an argument for the best Greek word being σπλαγχνίζομαι, but that’s again a subject for another post). In one word is captured this entire idea: “your salvation through Jesus Christ—in fulfillment of the prophecies and promises of Scripture—has been and remains still finished; there is nothing you need to, nor can, do to accomplish it for yourself. It’s already been and remains completed.”