Lent is 40 days in remembrance of the 40 days Jesus spent in the wilderness, fasting and preparing to be tempted by the devil. Ancient Israel spent 40 years in the wilderness as a consequence of their sin. Lent is a wilderness experience for us too. 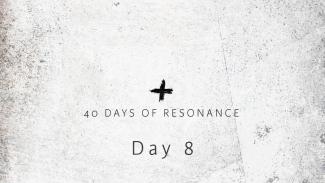 Jesus spent 40 days in the wilderness (Matthew 4:1-11), fasting and preparing to be tempted by the devil. We're not told in Scripture what He did in that time, other than He fasted. He went without earthly sustenance, and even in reply to being tempted by bread, He said that people don't live only by bread, but by every word that comes from the mouth of God.

Ancient Israel spent 40 years in the wilderness as a judgment from God after rejecting Him who brought them out of slavery in Egypt. (Read a summary of God's judgment in Numbers 14:20-35, though there's much more to the story). In the wilderness they experienced much hardship, though God was with them in that time.

It's been a common refrain for me already in Lent, but it's an important one: Where Adam and Eve failed in resisting temptation, where ancient Israel failed, Jesus succeeded. He stood up to the devil's lies and twisting of God's Word. He went through that on the way to the cross, for you and me.

Any talk of wilderness wanderings for you and me is spiritual and/or metaphorical. But even in the midst of any wilderness we wander through, whether as a result of our own sin or as a result of the brokenness of the world around us, God does not leave us alone. Jesus has promised to be with us always (Matthew 28:20), and He is always faithful to His promises. He is with you, even in the midst of your wilderness.