There are two governments in this world for Christians: the civil government, which rules in things of this world, and the spiritual government, also known as "the Church". God ultimately rules both, though in very different ways. How do Christians live under both? Can they? 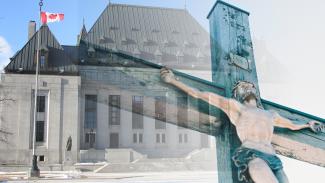 God is the ruler of the whole universe. This is a basic Christian teaching. Yet Christians often live in situations on Earth where the culture values things that God doesn't. In extreme cases, Christian living and teaching is illegal. For us who live in 21st-century Canada, Christian living isn't (necessarily) illegal. It's just mostly deeply frowned-upon.

The most recent case in point is our federal government's recent proclamation that, in order for any organization to apply for funding for a federal youth summer jobs grant, they are required to attest that there "core mandate" respects not only the Charter of Rights and Freedoms, but "other rights" named by the government itself. That is a subject about which I have much to say, and I'll be posting soon on that. But this post is about the more general concept of Christians living in a culture where there is inconsistency between the last of the land (and its culture) and Christian teachings as drawn from the Word of God, the Bible.

Though God is the ruler of the whole universe, people often say there is, and should be, a so-called "separation of church and state". That phrase is a uniquely USAmerican one, referring to the First Amendment of the US Constitution that prohibits congress from establishing a state religion. But it's widely used to argue that "politics", or move generally, the public square, and "religion" are two mutually exclusive domains. There need not be, nor should there be (so the argument goes) any overlap whatsoever.

If we were to Venn-diagram (can I use that as a verb?) this argument, it would go like this: 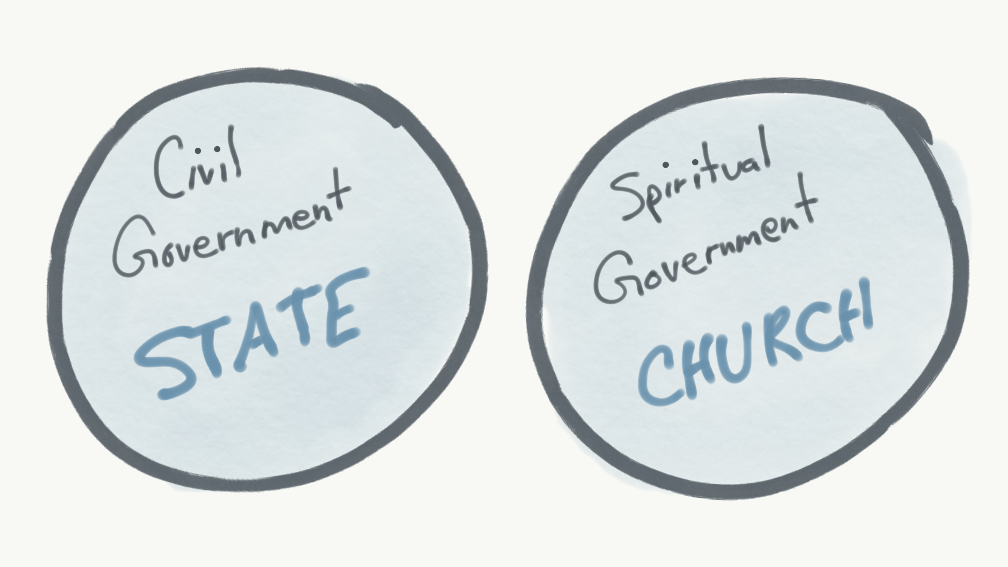 The confessional Lutheran church, in which I am a pastor, believes, teaches, and confesses that God rules the whole universe through two different governments: the civil and the spiritual. (Many times we'll use the language of "two kingdoms", but for now I'll stick to the "governments" language, and will explain why I prefer that in a future post.)

The civil government is what we typically think of as just plain "government". These are the governing bodies of geo-political nations. In Canada, we have a governing structure which includes national entities like Parliament, Senate, Prime Minister's Office, as well as provincial entities like Legislative Assemblies and Premiers, and municipal entities like City Councils and Mayors. These entities make laws, which are then enforced by police and the courts.

Our view is that this idea of civil government is the way in which God works to restrain evil and promote good. We often think about this as the so-called "first use" or "first function" of God's Law - to act as a curb or boundary that tells us where the lines between good and evil are drawn.

Christians are called by God to live as good civil citizens, obeying governments that act justly because the idea of civil government is designed by God Himself.

Let every person be subject to the governing authorities. For there is no authority except from God, and those that exist have been instituted by God. Therefore whoever resists the authorities resists what God has appointed, and those who resist will incur judgment. For rulers are not a terror to good conduct, but to bad. Would you have no fear of the one who is in authority? Then do what is good, and you will receive his approval, for he is God’s servant for your good. But if you do wrong, be afraid, for he does not bear the sword in vain. For he is the servant of God, an avenger who carries out God’s wrath on the wrongdoer. Therefore one must be in subjection, not only to avoid God’s wrath but also for the sake of conscience. For because of this you also pay taxes, for the authorities are ministers of God, attending to this very thing. Pay to all what is owed to them: taxes to whom taxes are owed, revenue to whom revenue is owed, respect to whom respect is owed, honor to whom honor is owed.

When, however, a civil government acts in explicit contradiction to God's moral law (to use a perhaps absurd example for the sake of argument, if Canada's Parliament passed a law requiring all citizens to murder one person per month), Christians may in good conscience (and perhaps might even be compelled by conscience) to resist that law, no matter the earthly legal consequences.

The spiritual government is the same thing as what I call the "big-C Church", that is, the one Christian Church on earth. Here God rules only by the Gospel, which is the Good News that Jesus Christ has shed His blood for the sins of the whole world and was raised to new life for our justification. In the Church, the Gospel reigns supreme. We're not ruled by the Law in the Church (though we rightly honour and seek to uphold the Law as a result of our salvation). The Law serves primarily to show us where we have fallen short of God's perfection and to thus point us to Christ who is our Saviour. This is the so-called "second use" or "second function" of the Law.

So how do they relate?

So the big question is, how does the civil government relate to the spiritual government? Are they mutually exclusive, like our 21st-century Canadian culture believes? Are they intertwined, like in 16th-century Germany? Or is there some sort of overlap yet with some distinction?

It seems counter-intuitive to us in Western culture, because we’ve come out of a time when the culture around us was at least broadly consistent with Christian values and God’s Law, if not Gospel. (Much more to say on that in the future, too.) We tend to think that the civil government should generally support the work of the Christian Church. And maybe it has in the past (although, it tends to support the social side of the Church’s work, not its proper work of Gospel proclamation). But no longer. Now, our Prime Minister wears emoji Last Supper sweaters and his government requires organizations to declare fealty to their own Liberal party doctrines before receiving public funding for summer jobs for young people.

What, then does this mean for the thinking Christian? What does a Christian, who wants to be a productive citizen of the nation and yet clings to a thoroughly Christian understanding, do when the law of the land goes so far afield of God’s Law?

Each situation will require much prayer and much conversation with other Christians and with people around them. There is no “one-size-fits-all” answer to living in the tension of our world. If you came to this post looking for that, you might be disappointed. But, maybe this post will get you thinking about the subject so that as we wade into the murky waters of “living as a Christian in a non-Christian culture”, you’ll have some tools with which to approach the task at hand.