You likely won't see much by way of new posts between now and Easter, since it's such a busy time for me as a pastor. So here is a picture of some old clocks to keep you ticking between now and then. 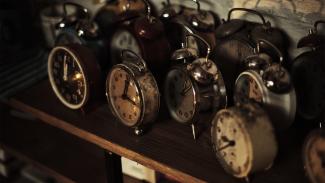 The season of Lent is an extra-busy one for a pastor in a Lutheran church. We have more worship gatherings than normal (feel free to come worship with us at Concordia!), and we've got some new efforts being developed along with starting to look ahead to the fall for our school and preschool.

So, while I know the importance of regular posting, especially when just starting out in a new writing project, the reality is that I won't be getting a lot published between now and Easter. I've got so many posts begun, or at least topics sketched out, but I won't be able to do much about getting them ready to publish in the next couple of weeks. If I do get anything published, it will be simple, short posts. Which is probably not a bad thing anyway; I've been known to be long-winded at times.

And, just as a teaser, I've got an idea that I'll also be putting into motion after Easter, one that I hope will add some value to this site without a ton of extra effort on either your part or mine.

And, just as a promo, I did launch Ask Away, where you can ask questions that I'll plan to answer as part of the site. (And the first question that came in is a "let's jump into the deep end" one, which I appreciate very much. I've always believed that the best way to get into a pool is doing exactly that.) So I invite you to add to my list of topics to write about by sending questions over the next few weeks.

Thanks for starting this journey with me. I'm excited to see where we'll travel together.