The Apostles led the Christian Church into the time between the Ascension and the Day of Pentecost. But that time was filled with joy, hope, and an active waiting for the promises of God to be fulfilled. Their praying hands got dirty as they fulfilled their callings and got to work in that time. 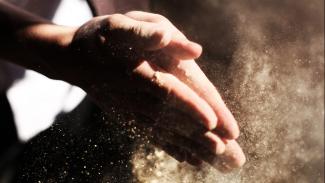 Photo by Austin Ban on Unsplash

In my sermon this past Sunday I mentioned, almost in passing, that the time between the Ascension of Jesus and the Day of Pentecost was a time of active waiting for the Church. It's something that stuck out to me while preparing last week, and is something that I haven't seen a lot of reflection on: that after the Ascension, the Apostles went about their work while they waited. I didn't have time on Sunday to explore that thought much more than simply saying that it happened, so I want to do that here where we have more time and space to reflect on this "little" point.

We read both Luke 24:44-53 and Acts 1:1-11 as we observed Ascension Day on Sunday (which, properly, is on the Thursday prior, 40 days after Easter). It was great having those two readings together on one day, since it gives us the chance to hear the end of Luke's Gospel account and the beginning of his second account, which we know as the Book of Acts (of the Apostles). There's some overlap as Luke describes the Ascension briefly in Luke 24 and in more detail in Acts 1.

What stuck out to me this past week, in a way that it hadn't before, is this:

While he blessed them, he parted from them and was carried up into heaven. And they worshiped him and returned to Jerusalem with great joy, and were continually in the temple blessing God.
Luke 24:51-53 (emphasis mine)

After the Ascension, the Apostles returned to Jerusalem, where Jesus said they would begin in being His witnesses, and they are waiting for the promise of being clothed with power on high to be fulfilled. But they don't just sit around! They get right to their work. They are continually in the temple, blessing/praising God. They're doing what they've been called to do. And the great joy of the disciples following the Ascension was expressed in the Church as they all gathered together. Reading on after Acts 1:11, we get more detail about what they were doing. Luke tells us that, among other things such as appointing a new man to fill the office that Judas let desolate (which is itself is a fascinating study), they were gathering as Church together with the whole group of Christians in that place and time.

All these with one accord were devoting themselves to prayer, together with the women and Mary the mother of Jesus, and his brothers.
Acts 1:14

They were gathering together continually at the temple and in this upper room, where the Apostles were teaching, preaching, leading the church in the prayers and the breaking of bread, and experiencing great fellowship. We often use this kind of description in the days after Pentecost, where we read about it in Acts 2:42-47. But 1:14 in the original also includes the little word "the" before prayer, just like in Acts 2:42. It wasn't just prayer in general, but the prayer (it's singular here in Acts 1, plural in Acts 2). There's an orderly, liturgical connotation here. It was just what they did. So Pentecost—not to minimize the significant of that day at all—wasn't something altogether brand new on that day. It was simply more people being brought to faith (by preaching about Jesus in many languages, let us take note!) and added to what the Church was already doing. This life and activity of the Church didn't begin on the day of Pentecost; it was already the normal pattern, and the Holy Spirit just brought many more to be a part of it.

Immediately after the Ascension, the Apostles and those gathered with them were getting their praying hands dirty with the work God has given them to do. The time between the Ascension and Pentecost was quite short (only about 10 days from the Ascension 40 days after the resurrection (Acts 1:3) until the one-day festival of the Feast of Weeks on the fiftieth day after Passover (Acts 2:1)), but it was full of activity! It's not like nothing happened until Pentecost. No, the Church was at work.

And so too today the Church is still at work while we wait. On Sunday I drew a brief comparison of the time between Ascension and Pentecost to the church season of Advent, a time of "active waiting" between a time when God made promises and when those promises were fulfilled. That's also where we are today: in the time between the second promise of the Ascension (Acts 1:11) and the fulfillment of that promise.

So we get our praying hands dirty as we get to work, doing all that God has called His Church to do, which is really nothing less than what those earliest Christians were doing: the life and activity of the Christian Church in gathering, preaching, hearing, praying, and sending. I think maybe this is an apt admonishment to the Church in this time of large controversy of "thoughts and prayers" in the midst of all kinds of suffering: Christian faith, which clings to the promises of Jesus, leads us to get to work in this time between the "already"—Christ has already won our salvation and sent the Counsellor to keep us in His Word (John 14:26)—and the "not yet", as we wait for His glorious return.