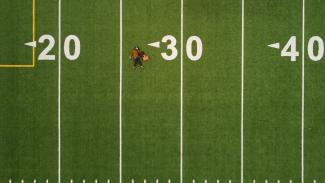 Photo by Martin Reisch on Unsplash.

At the end of the last football season, the coach of a professional football team used a word to describe the state of his team after it had just been eliminated from the playoffs. (Yes, we’re talking about playoffs, Mr. Mora.) Talking about the inevitable disappointment that comes from such a loss, he said that it had been tough, but we’re a...here it comes...family.

It happened at a press conference where a reporter asked an NFL head coach whose team exited the playoffs early about the reality that about one-quarter to one-third of players on a team in any given year won’t be back the next year. His response started with, “we’re a family”.

The irony of a pro football head coach saying “we’re a family” and then going on to discuss the fact that a bunch of his players won’t be with the team next year for reasons like cuts, signing other players who they think will fit better, letting some of them pursue more money...well, let’s just say the enormous irony went unnoticed by the coach, and it went un-followed-up-on by the reporter.

I know football reporters don’t have responsibility to keep coaches accountable for bad metaphors and over-used clichés (wait, that’s redundant), but somebody needs to. Someone with far more clout than a lowly pastor with a blog. But hey, we gotta start somewhere.

I like to say that clichés become clichés because they’re true. That’s how they become clichés. (I’ve used the explanation so often that it’s definitely in danger of becoming a cliché. Touché, non?)

Except this one isn’t. True, that is. It’s a cliché that so many people use. But it’s simply not true.

The point was exacerbated for me last month during the selection show for the annual Madness of March. As cameras were set up around the country to capture the reactions of teams and fans to the announcement of their selections to the annual NCAA men’s basketball tournament, I began to notice something odd: there were some teams that were all wearing plain white shirts with one big word emblazoned on the front.

I’ll give you three guesses about which word it was. (Yup, there’s another writing cliché. You’re welcome.)

At first I thought it was odd that a couple of teams were using the same word on the same t-shirt design with the same font...and then it was more than a coupl...oh.

It wasn’t odd. It was marketing. Good marketing, mind you. But marketing nonetheless. A certain athletics company, which shall remain nameless in this post because it doesn’t matter which one it was, that was sponsoring all these teams had arranged for them all to wear the same shirts for the same TV show.

In and of itself, that deserves some reflection, doesn’t it? The branding literally whitewashed the various school colours and replaced them with one word and the symbol of this company (a very, very famous symbol which doesn’t need any words to identify the company). Brilliant marketing. And a potentially disturbing commentary on the state of so-called non-professional collegiate athletics.

But the point of this post is not marketing. It’s the use of that certain word to describe sports teams.

Let me just say it plainly, even though it’s taken 347 words to get to it: sports teams are not families. They are sports teams. Using the metaphor of “family” for a sports team is more than a cliché. It’s maybe the worst sports metaphor in the history of sports metaphors. And that’s saying something. (Yes, I’m looking at you, “control their own destiny”.)

That football team? As the reporter said, the following year’s roster would likely have 25%-35% players on it that hadn’t been on the roster that year. Of the players that will have left, some would be cut for underperforming. Some would have contracts expire and not be renewed, for one or more of many reasons. Some would be traded so that the team could (in the opinion of the personnel department) get better. Some would be looking for more money or better terms of their contract and would find those things on another team.

Does any of that sound like a family to you? How many non-reality TV families do you know that have a personnel department?

Those basketball teams? Some of those players will be with the team for one year before looking for big money through the NBA draft. No one’s blaming them for that (certainly not me), except for a few college basketball purists who think that going to college isn’t as much about basketball as it is about getting a degree. Which, if you think about it, is supposed to be a preparation for your chosen field of employment. Right? So, if a young adult prepares for employment in the NBA—which, last time I checked (which is never) doesn’t list “college graduate” on its Zip Recruiter profiles—then why is that preparation less valid than the one who graduates with an accounting degree and gets a job in an accounting firm?

What was my point again? Oh, right: sports teams aren’t families. Yes, there is often a deep bond formed between players, and often (especially in college) coaches and players. Yes, some lifelong friendships are formed. And those are good things. Don’t get me wrong; this is not to say that some incredibly close bonds aren’t ever formed on teams. Quite the opposite.

But let’s not pretend that sports teams themselves—especially professional teams—are families. They’re businesses, and they’re meritocracies. If you underperform, you’re out. If you have unreasonable contract demands, you’re out. If you (sadly) get hurt, you’re out. Someone else will come in and take your place. Many times, you’ll be fondly remembered and rightly honoured for your time with the team. But you won’t be on the team anymore.

Same goes for coaches and executives too. That coach who described the team as family? He has 3 seasons, at most, of losing records before he’ll be fired too. His continued presence as a part of that team is absolutely conditional on winning games, which in turn sells tickets and merch, which in turn makes the owners money.

Families—while never perfect (again, don’t get me wrong; I’m not idealizing families as if nothing bad ever happens in them)—are orders of magnitude more stable than a professional sports team. Families don’t experience 25% turnover every year. They may be added to, yes, but that overwhelmingly happens through a few joyful events like births and marriages. And yes, true families do experience loss and heartache when relationships break down beyond repair or a family member dies. But entering and leaving a family happens for reasons that don’t even begin to compare to the reasons for entering a leaving a team. Forget being in the ballpark (how many is that now? Six?); they’re not even in the same galaxy when it comes to comparisons.

Now that I’ve beaten that dead horse (another awful, awful, cliché!), let me offer something outside of the typical—what’s generally called the nuclear—family that is actually a family: the Christian Church.

The Christian Church is a family, not a pro sports team. Congregations are local expressions of the one Christian Church on earth, not franchises (1 Corinthians 1:1-2). They’re made up of brothers and sisters in Christ, not recruits (1 John 3:1-2). Membership the one Church (and by extension, the local congregation) isn’t a negotiated contract between member and pastor, with terms and conditions that, if broken, will result in said member (and/or pastor) heading over to the next franchise that will offer better terms. (It’s OK to admit it; that one might have hit particularly close to home.) Membership is an adoption by God Himself into His own family (Romans 8:14-17, Ephesians 1:2-6, among others). God is not a team owner, looking to build a roster filled with the best, strongest, fastest players money can buy so that he can make millions from spectators who wish they could be 1/10th the player that the people on the team are. No, He’s our Creator, Father, Saviour, and Helper who calls absolutely unworthy individuals and makes them into a chosen people (2 Peter 2:9-10). And, He even goes so far as to say that this chosen people, this family, has stronger bonds than earthly families (Matthew 12:46-50, Hebrews 2:11-17, among others). Even more than that, He calls people who are dead in their sin and makes them alive in Christ (Ephesians 2:1-10).