We dare not overlook the physical implications of social distancing, or of eternal life. 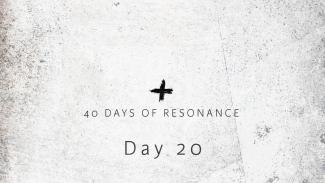 One of the significant impacts of this pandemic is that people are physically distanced from each other. Well, duh, you might say, but stick with me for a minute.

For so many people, a handshake, a hug, a high-five, are so brief but so meaningful in terms of connection. There are reports out there (I’d look them up if I had more energy; if someone wants to source these for me, that’d be great...) that we need a certain amount of physical contact in a day to be healthy. Tragically, it’s reported that infants can even die without adequate physical touch.

So the effects aren’t only economic, emotional, or psychological. They’re physical. We aren’t just “luminous beings” trapped in “this crude matter” (yup, Yoda was wrong). We’re both body and soul together; that’s what it means to be human. Death is actually the tearing apart of body and soul, and it’s a tragic thing.

So we could rightly say that we’re losing a bit of our humanity when we’re deprived of even the simplest of physical connections with others. The physical is being diminished, and now all the Gnostics out there are going to have to find a new heresy to cling to (see what I did there? Oh how clever...) because it’s becoming ever more painfully clear that the more we lose physical connection, the worse off we are.

In fact, we’re now getting a taste of what life might have been like for lepers in ancient times. Leprosy was a skin disease which could be transmitted by physical contact, and those who had it were cut off from the community. They were singled out as “unclean” and experienced all the shame and pain that comes from isolation.

It’s true that Jesus didn’t heal everyone He encountered who needed it. But when He did heal people, the physical, earthly healing was a sign pointing to something more, that He was there to bring something more than earthly healing; He came to bring eternal healing. Yes, eternity is going to be a profoundly physical place. Body and soul will be reunited and we’ll be fully human, full alive again, forever. That’s the promise of eternal life that Jesus brings.

Until that day comes, we live in the midst of brokenness, and right now, much more isolation than we’d like. But we hold on to the promise. And next time we’re able to shake a good friend’s hand or give a high-five on the ball diamond or basketball court, we’ll be able to take it a little less for granted. And maybe, just maybe, we’ll be getting a little glimpse of the promise of eternity in those moments.